Neo is a female broad-winged hawk (Buteo platypterus​). She was rescued from a road in Tygart Lake State Park near Grafton, WV, after being hit by a vehicle in the summer of  2010 when she was still a fledgling. Neo suffered head and eye trauma, and is permanently blind in her left eye as a result of the accident.

Broad-winged hawks are Neotropical migrants; during the summer they nest and raise their young in eastern North America, and then in autumn, they migrate in large groups (called "kettles") to Central and South America. They are considered complete migrants, which means the entire population leaves one area and moves to another. Broad-wings are one of the smallest hawk species found in West Virginia, typically weighing less than a pound. They eat a variety of small prey species, including amphibians, reptiles, mammals, and invertebrates.

Neo was transferred to the ACCA when the center where she had been living ceased operations. We love working with this big girl and are thrilled to add her to our educational team! 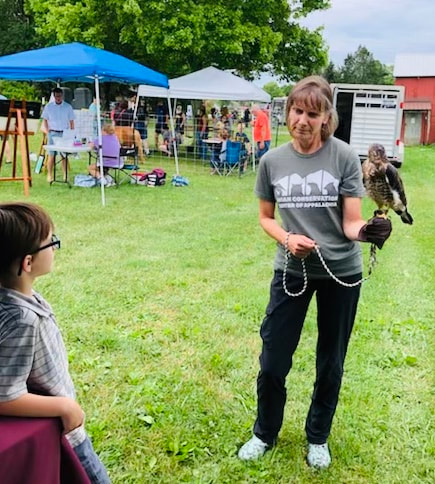